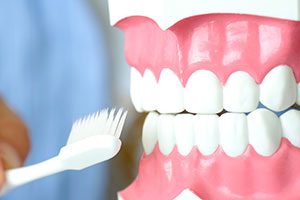 Do You Have Bleeding Gums?

When brushing your teeth and flossing, there should never be any sign of bleeding gums. However, many people continue to experience this issue. Find out the major causes and possible implications.

The most severe potential cause of bleeding gums is periodontal disease. An infection of the gum tissue, it can cause red, swollen, bleeding gums, as well as bad breath. If left untreated, more advanced stages of the disease can even lead to tooth loss. If you have bleeding gums due to periodontal disease, don’t wait for the condition to worsen. It’s unlikely to get better on its own, so it’s highly recommended to seek an evaluation as soon as possible. With modern periodontal treatments, we have many tools at our disposal to combat the condition.

Other Causes of Bleeding Gums:

Your brushing and flossing techniques may need some improvement!

You may think that you’re doing an excellent job by cleaning your teeth thoroughly. But if you vigorously scrub and scour your teeth while brushing, you’re not doing them any favors. Brushing teeth too hard (or using bristles that are too stiff) can cause toothbrush abrasion. That’s when your tooth enamel is scratched and scrubbed away!

Instead, use only a soft-bristled toothbrush, and be sure to angle the bristles away from the gums when brushing the front, back, or sides of your teeth. This technique will help prevent irritation to the sensitive tissue and avoid bleeding gums!

Bleeding when flossing is never “normal.” However, it may often occur if you’re first trying to begin (or reinitiating yourself) with this helpful hygiene habit.

When flossing, the proper technique involves lateral, side-to-side pressure. Never pull the floss forcefully down toward your gums. That’s the quicked way to cause severe laceration and injury to your gums.

Instead, hold either end of the floss and form a “C” shape around the tooth. Then, clean by gently guiding the floss along the side of the tooth. This method will prevent problems while flossing!

About the Author: Robert Pearce, DDS

Born in Allentown Pennsylvania, into a family of musicians, Rob Pearce grew up studying violin, percussion, jazz arranging and composition. After two years at the Berklee College of Music in Boston, he transfer to the pre-dental program at the University of Miami and later moved to San Francisco where he earned his Doctorate in Dentistry (DDS) from the University of the Pacific Arthur A. Dugoni School of Dentistry in 1990. For the past twenty eight years he has focused his efforts on mastering the art of high quality, long lasting “metal free dentistry,” a concept that was relatively new at the time but over the years has gained powerful momentum. In 2014 Dr. Pearce became a member of the “Visiting Faculty” of Spear Education, arguably the most prestigious dental continuing education program in the world. As a Spear Open Wide Foundation Ambassador, Dr. Pearce and his team travel to Guatemala to provide metal free dentistry to those who would otherwise receive no dental treatment at all. Dr. Pearce and Annette Rig were honored, and lucky enough to treat the very first patient at the Foundation’s first clinic in 2012. Since then, with the outpouring of support from our member dentists and American equipment manufacturers, we now have six clinics and have treated over 200,000 patients in need! The foundation’s goals include helping improve the education of Guatemala dentists. In 2015, as a member of the Education Development Committee, Dr. Pearce presented an all day lecture and workshop for the faculty and students at the Galvez School of Dentistry in Guatemala City.